Highlights from the 2017 National Workshop on Christian Unity

More than 200 ecumenists of all sorts gathered in Minneapolis under the theme Reform, Repent, Reconcile.  A moving setting of Evensong took place at St. Mark’s Episcopal Cathedral to open the workshop.  The Most Rev. Michael B. Curry, Presiding Bishop of the Episcopal Church, delivered a rousing sermon challenging those congregated t o being God’s presence even in challenging and adversarial situations.  The Good Samaritan provide help and comfort – without judging whether the person was deserving or not.  During the service, the Five Ecumenical Commitments from the joint Lutheran-Catholic statement titled From Conflict to Communion were recited. 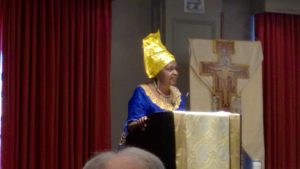 Theologian-in-Residence Grace Imathiu (United Methodist Church) used biblical passages of encounter and hospitality to challenge attendees to being as Christ to others. A gifted preacher and forth-teller, she brings a special gift in sharing the work of God among humanity.

Presiding Bishop Elizabeth A. Eaton, Evangelical Lutheran Church in America, and retired Auxiliary Bishop Denis Madden, Roman Catholic Archdiocese of Baltimore, offered a plenary session focused on the commemoration of the 500th Anniversary of the Reformation.   The two church leaders lifted up the convergence and reconciliation occurring around the globe among Lutherans and Roman Catholics.  They shared reactions to the Joint Commemoration that took place in Lund, Sweden in 2016 to launch the year-long remembrance of Reformation – a commemoration in which Pope Francis participated along with Bishop Munib Younan of the Lutheran World Federation.

A special concert took place at St. Olaf’s Roman Catholic Church in Minneapolis which further commemorated the 500th Anniversary.  A blended choir, under the direction of Artistic Director David Cherwien, provided a rich variety of music, interspersed with meditations on the Five Ecumenical Commitments in From Conflict to Communion. 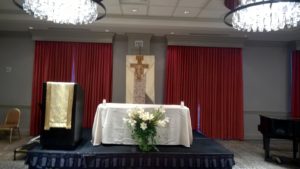 Eucharists were celebrated following breakfast on Tuesday and Wednesday morning.  It has become the practice at the workshop to invite all attendees to be at both a eucharist according to the Roman Catholic rite and a eucharist according to the rite of one of the church bodies in a full communion or eucharistic-sharing relationship (i.e., Episcopal, Lutheran, or Methodist).  It is a powerful witness to the unity we share in worship, while at the same time a witness to the pain of not being able to receive the body and blood together.

While there were snow flurries and rain at the beginning of the week, by Wednesday the weather broke and allowed attendees to get out of the hotel and take in some of the sights and ministry venues in downtown Minneapolis.  There were tours of historic churches, as well as a visit to a downtown ecumenical ministry serving the homeless. 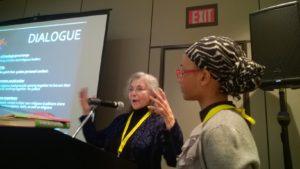 Attendees could also opt for interreligious sessions that addressed ministry to refugees, as well as a unique Christian-Muslim campus ministry at an area college.  There was also a session on preserving ancient manuscripts threatened by the ongoing conflicts in the Middle East.

The banquet keynote was presented by The Rev. Canon Peg Chemberlin, Executive Director, Minnesota Council of Churches.  The Council continues to have a significant presence in advancing ecumenical ministry throughout the state.  Final seminars addressed social and environmental justice, responses to climate change by the faith community, common prayer during times of unrest, and global ecumenical Christian witness.

Equipping Church Leaders in the Quest for Christian Unity

NWCU is sponsored by the National Ecumenical Officers Association.